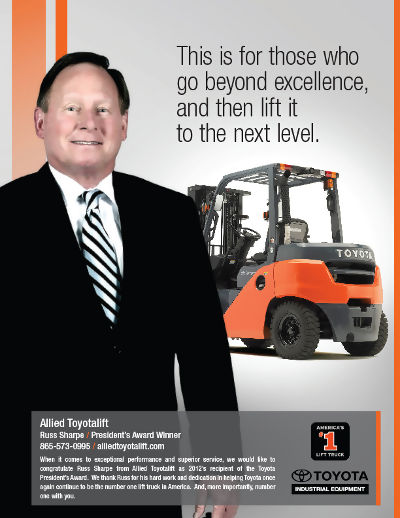 Allied Toyotalift is proud to announce that we have received the prestigious Toyota President's Award in 2014. The President's Award, TMHU's highest honor, has been awarded to select dealers since its inception in 1990 to acknowledge their outstanding business accomplishments. To demonstrate the company's appreciation, each President's Award recipient received an exquisite Tiffany & Co. crystal award. TMHU also is hosting a trip to Hawaii for the award recipients.

Allied Toyotalift has been the proud recipient of this award 7 times in the last 10 years. Russ Sharpe, President of Allied Toyotalift, stated that "committing our dealership's performance standards to levels that have met or exceeded customer expectations in the areas of Sales, Service, Parts, & Rentals has been the key." Further, he said "we have continued to invest in our employee's through training and facilities updates which has paid big dividends in customer satisfaction over the past several years".

About Us Press Releases News